Last week I finalized the new logo design for Small Prints Photography. It was designed for me by Zoe Ruckledge at All Spruced Up www.all-spruced-up.co.uk/. I am delighted with it ! It's taken many hours of thought and a few revisions to get it just right. So I can't thank Zoe enough for sticking with me.

The new design has a few elements about it with a bit of Scottish history, folklore and legend attached to them.  Don’t you just love a good old story to make things a little more interesting and more meaningful ?

The new design is based around an old Scottish love token called a 'lucken booth'. Heart shaped brooches are recorded in Scotland’s history as far back as 1503. In the 18th century they became known as luckenbooths, because they were sold from locked booths; the first permanent shops along the royal mile in Edinburgh, in the jewelery quarter outside St Giles Cathedral. Oringinally they were quite small, but by the time Mary Queen of Scots was given a luckenbooth from Lord Darnley, they had become a lot more elaborate. She was the reason a crown became part of the design.

Luckenbooths were given as a love token on engagement or on betrothal. They were considered to bring good luck and protected the wearer from evil. In that day and age, their ‘power’ thought to be so great, that subsequently they were thought to ease childbirth if pinned to petticoats near the left thigh of the mother. Then, they were thought to speed the milk supply after the birth.  But perhaps the most poignant part of this legend and the most relevent, is that they would then be pinned to the shawls of new babies to protect them & to prevent them being stolen by fairies !

Since every parents first instinct is to protect their child, this sentiment seemed just perfect for a logo. The Small Prints version has two small hearts representing parents, and one large heart encompassing babies ‘Small Prints’. The Small Prints crown is inspired by modern abstract family sculptures I've seen, and, if you look in a more abstract way, it represents a family holding hands. When I looked at heart shapes for inspiration, I stumbled across my gold lucken booth pendant I wore one on my wedding day. I knew then that the sentiment behind these hearts and the crown emblem was just the right thing to display by all these beautiful 'Small Prints' babies. 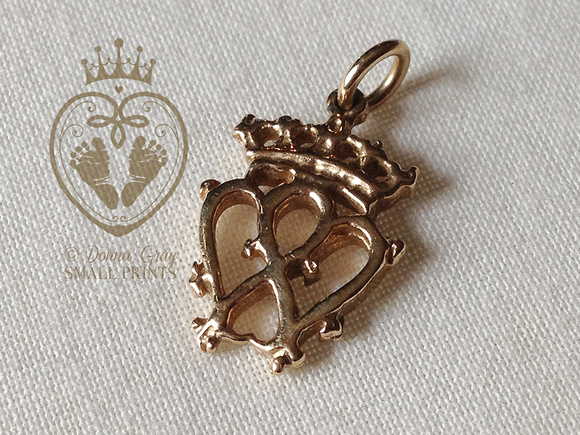 The new logo, will serve as a pretty and subtle watermark, applied to all images that go on the internet to protect them.  Watermarking makes images traceable. In line with advice I received from CEOP (The Child Exploitation and Online Protection Centre) this is the best way to protect images on line.

In time as I develop my business, from booking, through the shoot, then ordering and receiving the finished images, the logo will be on packaging materials that may be re-used by parents; in turn also protecting the enviroment a little.  Packaging in the Small Prints gift pack, on prints, and collections of images will provide parents with a lovely set of decorated items that package their items beautifully, but also leave them with a keep sake box and small boxes and linen bags that babies first treasures can be stored in. The things we all tend to keep like; hospital bracelets, first curls, a first tooth, first outfits, first shoes and so on.


So .. it's not just a heart and some baby feet with a little crown above it. A little more though was put into it than that.  There is something a little more special and meaningful behind 'Small Prints' and my logo is not only pretty to look at. I hope you agree it feels like a  'Work of Heart' !